3 Socially Unacceptable Things One Dad Only Does Around His Kids

3 Socially Unacceptable Things One Dad Only Does Around His Kids 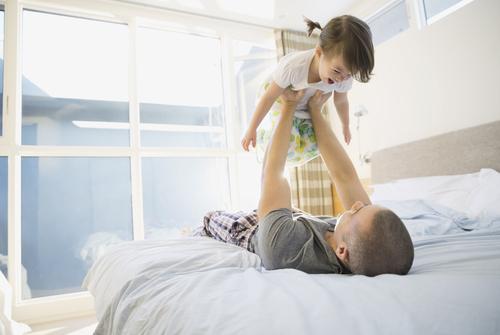 One of the fringe benefits of being a dad is that my kids don’t really know what the word ‘cool’ means yet. I dig that. I have three rugrats all under the age of 6, and although I’m well aware that the day is coming when my oldest daughter, Violet, will look at me and say that I’m the source of all shame in her life (“Please, DAD, just drop me off at the corner before we get the school!”). Thankfully, that day hasn’t come yet. I still have a little wiggle room when it comes to being silly with them. I’m still able hang with them and act like one of them and get away with it (well, most of the time).

As lame as it may sound, kids let you be kids again. It’s an undeniable fact that if you run around town with a gang of Nickelodeon-watching, Goldfish-crcaker-eating, sippy-cup-sippin’ young guns, you’ll find yourself on the silly side of things before too long.

In case you haven’t been down this particular avenue in life just yet, let me tell you something: Kids don’t always understand that you’re messing with them or that you’re trying to make them laugh. Once you understand that they pretty much make the rules up and you’re just a slave to their whimsical folly, you’ll actually start to enjoy being with them – and one of the main reasons is because you’ll be able to act just like them: like a total and utter mentally deranged asshat. (Which, psssst, is a very very liberating feeling, my friend.)

So run with it while you can. Do funny and semi-harmless things with your kids that you wouldn’t be caught dead doing with anyone else. Because you deserve to act like an idiot sometimes nd they deserve to know that Mom and Dad are really just a couple of overgrown brats. Here’s 3 socially unacceptable things I do with/around my kids, either because it makes me feel young again OR because embracing my uncoolnesss is really what parenting comes down to.

1. I do voices – and I don’t just imitate Patrick Star or Mr. Krabs, I BECOME THEM.

I do voices. Character voices. A lot. I used to do them in my marriage too, for my wife. Or AT my wife is probably the more honest way to put it. She didn’t seem to enjoy that. But my kids do. Now when I say I do voices, I’m not saying I do some half-assed Mickey Mouse voice when I’m tucking them into bed, man. Oh no. I get into character, sometime like six or seven characters at once. I’ve almost driven off the damn road putting on full Broadway productions while I’m driving my gang around.

So, who do I do? Psssssh. Who do I NOT do is more like it. These days, I’m all up in the Spongebob world. My Henry, 3, and Violet, 5, are straight-up junkies for that show and since I think it’s one of the most brilliant things that’s ever been written, I jumped at the chance to imitate the residents of Bikini Bottom. Am I any good? Well, that’s not really for me to say, but let me put it this way: You’re godd*mn right I’m good! I cruise us down mountain roads and farm lanes around where we live and I turn on the freaking jets, man. I don’t just ‘imitate’ (little wee man voice) Patrick Star or Mr. Krabs, I BECOME THEM! I get so high on watching my kids laugh in the rearview that there are times when I know I’ve lived my life all wrong. I should’ve been committed to the nut house long ago, before life and responsibility ever set hooks in me.

I would have made a wonderful madman. I really would have.

Straight up: if you have young kids and you don’t spend at least like 20 minutes a day making fart sounds with them, guess what? You suck at living. I try and make my kids laugh as much as humanly possible. Not just so I can massage their tender mental state or see their fragile smiles break out and sunbeams sparkle out of their ever-loving eyeballs. I try and make my kids laugh because it is a challenge I have set up for myself, a gauntlet of no return. As a divorced man in his forties, I need to challenge myself in fresh and vibrant ways that don’t involve skiing or any situation where I can get bruised, laughed at by women or killed. So, I’ve got these kids and why not incorporate them into my own childish needs?

When I interrupt one of their rambling monologues from the backseat of the Honda with a real ripper, a fart sound so prolific and profound that it sometimes makes my baby, Charlie, kick his feet up in the air in an effort to protect himself from whatever kind of demon has just entered the vehicle, I know what’s coming next and it always makes my day. They stop their chatter and for a long second silence fills the car. Then. They erupt in giggles to the point of tears and pretty soon, no matter how tired or cranky they might be, they start making their own fart sounds, too. I’m not the kind of guy who tosses word delightful around all that much. But in this case, that’s the word.

We talk about Bigfoot. Obviously, there’s risk involved when you’re dealing with very young children. Hell, when I was 7 I saw a preview for a Bigfoot movie on TV and I was so horrified that I ended up having to sleep in my little brother’s bed for the next nine years. But my three-year-old, Henry, caught wind of Bigfoot somehow and is excited by the idea of a Yeti running around in the woods by our house, so who the hell am I to deny him the horror or thrill that comes with young paranormal fascination, you know?

Now, I’m not saying that Bigfoot is real or not. (He’s real). But no matter what you think, I’m a big believer in believing. I think the more kids believe in Bigfoot and Santa and dragons and witches and tooth fairies and whatever else floats out there in the imagination, the better their minds will grow and thrive. So sometimes you have to lie to kids to take them to a magical place up in their heads. Lying gets such a bad rap, which I get. But there is such a thing as GOOD LYING which we all ought to embrace a little more, especially when it comes to puffing up our work resumes or getting jiggy with our tax write-offs (home office, anyone?). And especially, especially when it comes to telling our kids about the Great Big World out there, waiting to be discovered by them when the time is right.

What kid, raised on good lies to the point where their imagination is a fat, sweet foie gras of creativity, isn’t going to hit the world running when his time comes? What kid staring out the window of a Honda with wild-eyed fascination, scanning the tree lines for a dark splotch of Bigfoot isn’t more poised to be a great writer or musician or film-maker someday?

Maybe you think that’s not true.

But then again, you probably laugh at the Bigfoot believers, too. And that’s why you’re missing almost everything.